How Often do Burglaries Happen in the U.S.?

Your home should be your fortress but are you doing enough to protect it? According to the Bureau of Justice Statistics, the US alone experiences 3.7 million burglaries a year: that’s 10,137 burglaries every single day. The majority of these are residential break-ins and home invasions and yet, only 17% of US homes have a home security system in place.

Wire-free home security cameras like Kami are designed to provide you with flexible, reliable and affordable home protection. As the majority of burglars enter through the front door, strategically placing your Kami to overlook the entry points of your home can significantly reduce your risks of experiencing a home invasion.

As with all things in life, knowledge is power. Learn more about how often burglaries occur in the US, who’s at risk and how you can make sure you and your family are safe.

What’s the risk of experiencing a burglary?

Higher than you might think! Different sources estimate between 2.5 and 3.7 million burglaries occur on an annual basis, depending on the definition of a home invasion. Put in more manageable numbers, that’s one burglary every 13 seconds.

According to the Federal Bureau of Investigations, 65% of all burglaries occur in day-time hours (between 6 am and 6 pm). The most common hours are between 10 am and 3 pm, when chances are most residents will be away from home.

Data shows the majority of burglars are young males under the age of 25, while female burglar cases are still fairly uncommon. A more worrying statistic, however, has to do with the identity of the burglars. While 85% of cases are committed by non-professionals, 65% of burglars know their victims.

How does a burglar enter my home?

Your front door is usually the riskiest point of entry, with 34% of burglars entering (forcibly) through the front door. Less than a third of all burglaries occur through a back door (22%) or through a first-floor window (23%). The second floor of your home carries a much lower risk of forced entry (only 2%). Surprisingly, 4% of cases occur due to an unlocked entrance, and further 9% of burglars enter through the garage.

In terms of internal layout, the master bedroom is usually the first target. That’s because most homeowners store valuables such as jewelry, cash or weapons there. Do you keep your valuables in the dresser? Statistically speaking, that’s the first place a burglar will look, followed by the closets and under the mattress.

While most burglars will attempt to break in when they expect no one to be home, this isn’t always the case. According to the Federal Bureau of Statistics, almost a third (28%) of all burglaries occur when someone is inside the house. Witnessing a burglary is not only a traumatic experience but can pose a significant danger, which is why dissuading the thieves from entering the home in the first place is of the essence.  What’s more, over half of homes suffer from repeat burglary within a single month of the initial offense.

How do I protect my home from burglary?

Let’s talk about solutions. On average, a break-in lasts between 8 and 10 minutes, which gives you, the homeowner, little time to react even if you do suspect a burglary is occurring at your house. Does this mean a home security camera is of no use?

While it’s true that home security cameras cannot physically prevent a burglar from entering your home, statistic shows they’re actually pretty effective at discouraging burglars to attempt to break-in in the first place. Homes without a home security system have a threefold chance of getting broken into. Furthermore, a study on incarcerated burglars, done by KGW News, found that the majority of inmates believe seeing signs of a home security system or a dog would prevent them from attempting to break in. In fact, over 80% of burglars admit they would abandon a burglary if they see a security camera.

With 87% of burglaries considered preventable, having a home security system in place can literally be a lifesaver. Most statistics on the average monetary loss, associated with burglaries, only consider stolen valuables and not damages, caused by the break-in. Even the most basic home security camera can decrease the risk of being involved, witnessing or suffering a break-in by 87%.

Of course, make sure to follow basic home safety advice to prevent burglaries, such as: locking your front and back door and install locks on your windows (particularly on the first floor). You can also use timers for your interior lights, whenever you’re out of the home: this creates the illusion your home is being occupied, which can dissuade the majority of burglars from attempting to break-in.

Finally, consider investing in a home security system such as the Kami or YI Home. With only 17% of US homes relying on a security system, having one in place can make a world of a difference.

Are you interested in more things YI and Kami? Join our forum and say Hi! 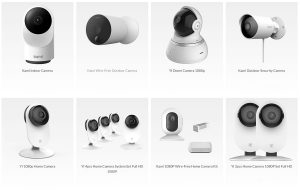